Today was our first cycle around the area – we had planned to cycle to Wettolsheim, walk around the market, buy some pain and vegetables and cycle back to Hilma. On arrival at Wettolsheim we came across a huge open air grotto – a memorial to the fallen in the great war, also something about children which we couldn’t quite make out.
On entering the ‘centre ville’ we found the market today was one stall – some ropey old veg. A quick visit to the boulangerie for our staple bread and croissants and a change of plan was needed. Looking at the map we decided to move on to Turckheim (which I remember our neighbour saying was a great place to visit). Less than half an hour later, on lovely flat and uncrowded roads following the ‘Route des Vin’ signs, we found ourselves in another walled medieval town. This one much bigger than Eguisheim and not quite so ‘twee’, yes still catering for us tourists but had a much more lived in feel.

More pretty buildings, more pretty flowers, more cobbled narrow streets and a few café’s and restaurants (what’s not to like?). A coffee was needed before we set off to explore the town on our bikes which didn’t take too long. The cleanest public loos I have ever come across – anywhere!
We decided to stop for lunch and had Tarte Flambee (thin pizza), a beer and Perrier, followed by another café before wobbling away again to find a supermarche to buy our veg. Just like at home in the UK it seems the small independent grocers are few and far between – I guess people rely more on the markets for their fresh produce. 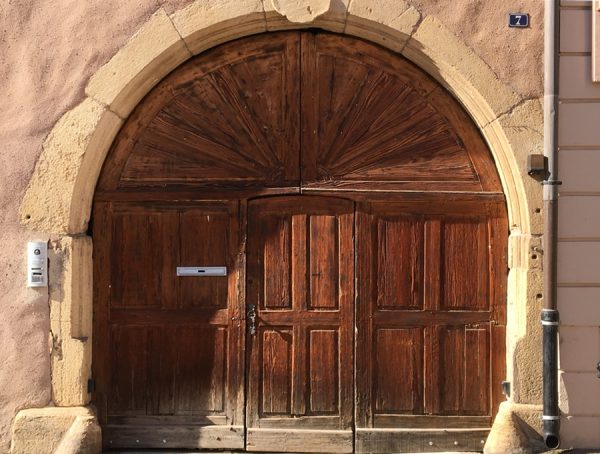 Is it me or are the French more respectful of cyclists? They seem to be much more patient than their British counterparts and also give us more space (maybe not in Paris though?).
Finished off the day sat outside Hilma in the late sunshine, a glass of Reisling and a good book – later an end of day walk in the vineyards as the sun was setting – what a life – I want more of this!