Tiptoe through the tulips……………

Netherlands: 6th May
Some of you may recall that infamous song made famous by Tiny Tim (6’ 2”) in 1968 – for those hipsters reading this…. What the hell is he talking about …. Google it!
Off we go again in Hilma – last time we were out it was -3°C and 6 inches deep in snow. Now temperatures were soaring to +23°C. We have never been out in Hilma when it has been so hot – lovely. Overnight ferry from Harwich to the Hook of Holland meant we had some sleep before the very long journey the next day, all of……. 34 miles. Nothing seems too far in Holland, except that is the N206 road, which we decided we liked so much we thought we would go up and down it a few times just to make sure we liked it. Having eventually found the Op Hoop Van Zegen (‘Hoping for the Best’) – all ‘hope’ had been extinguished by that damn road. Anyway, less of my moaning – we arrived.
Not really our cup of tea after the delights of wild camping in Scotland and the free Aires in France but in my inevitable way of wanting ‘something to be organised’ (at least for the first 4 nights) it would do. The afternoon saw us cycle into Noordwijkerhout for provisions (a shiver ran down my spine as I thought we might have to cross the N206, but fortunately the Netherlands is blessed with cycle paths which steered us away from the dreaded road. A few cheap beers and tonic for the Tanqueray Gin off the ferry we were all set (oh yes, we did buy some salad and veg).
Deep sleep beckoned us that night – we were both knackered – nightmares of the N206 haunted me but not bad enough to wake me.

Kuekenhof: 7th May
Today we are off to some famous gardens – the name reminds me of that wonderful cake we found in the Alsace .We decided to cycle there as the information sheet picked up from the ‘Hoping for the Best’ office said it was 25 mins. We decided the Dutch cycle very fast – and yes, we did get lost again despite having all the appropriate cycle maps – ‘Hoping for the Best’s’ advisory 25 mins turned into 50 mins. But we were not disappointed – as soon as you walk in you are immediately hit with a riot of colour, although not in an obscene way. Some were strong and vibrant while others were soft and subtle and all made up from just tulips. 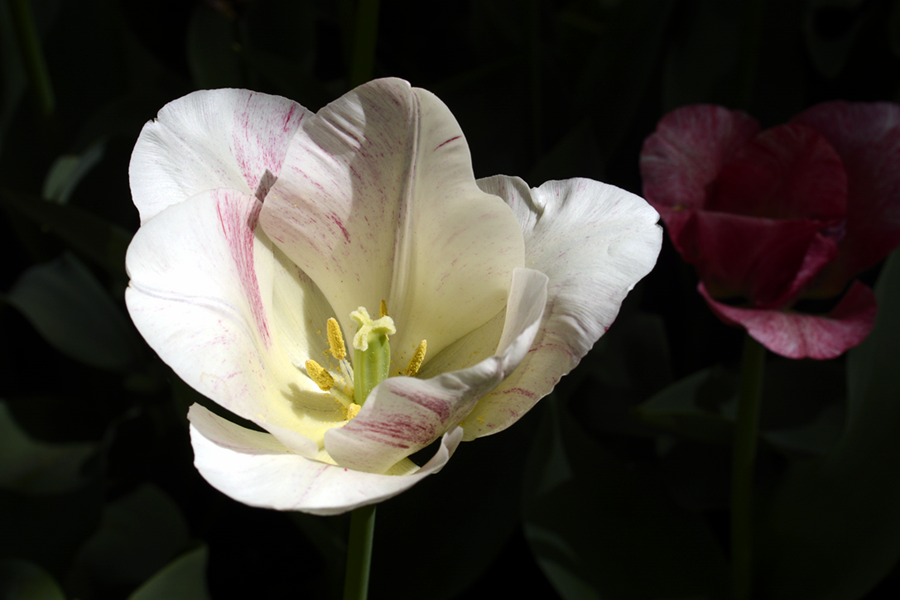 Creamy Delight – no, that’s not the name of the tulip! 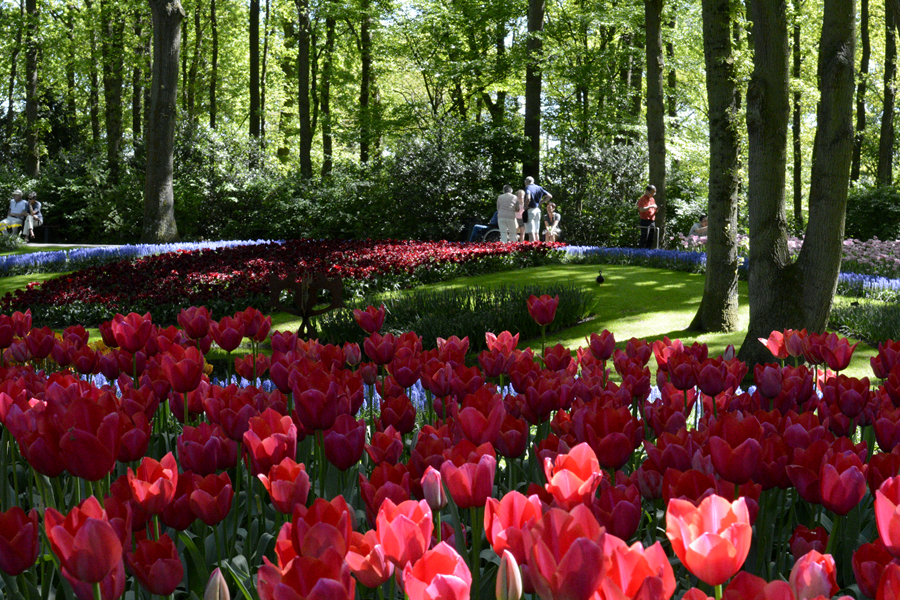 I say ‘just tulips’, these were the very flowers that brought many of Amsterdam’s businessmen to their knees in the 17th Century with Tulip Mania. A single bulb in the 1600’s could cost as much as a Porsche (or 300,000 bulbs) in today’s money – madness – all driven by greed. And yes, the market did crash, it always does.

Sometimes the softer tones shine through 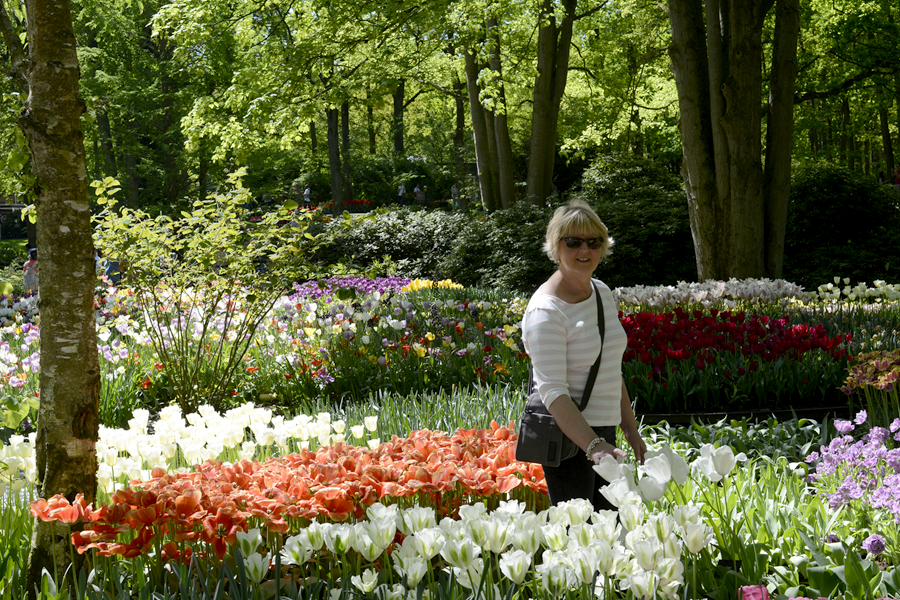 Coffee, apple pie, mango & banana smoothie, chips and mayonnaise and ice cream kept us on the go as we wandered through the layers of visual delight. I have always thought the tulip a bit of a one hit wonder and not really appreciated it, I think when you see one or two poking their heads up in someone’s pot or border they really are quite unremarkable. When you see them at the Keukenhoff you see them in a different light altogether – and what light that is, dappled shade interspersed with the occasional burst of sunlight really does bring a new dimension in how to show off these (I now think amazing) flowers. It can take a grower 25 years to get the perfect specimen, me, I’ll just go and buy some. Well worth a visit if you are in the area, but I believe it closes mid-May as of course most of the flowers are over by then. 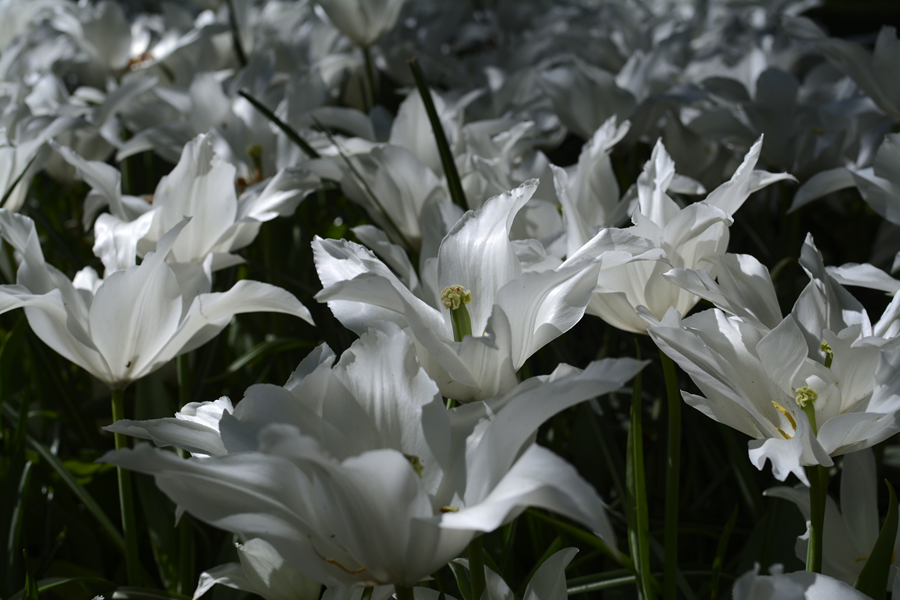 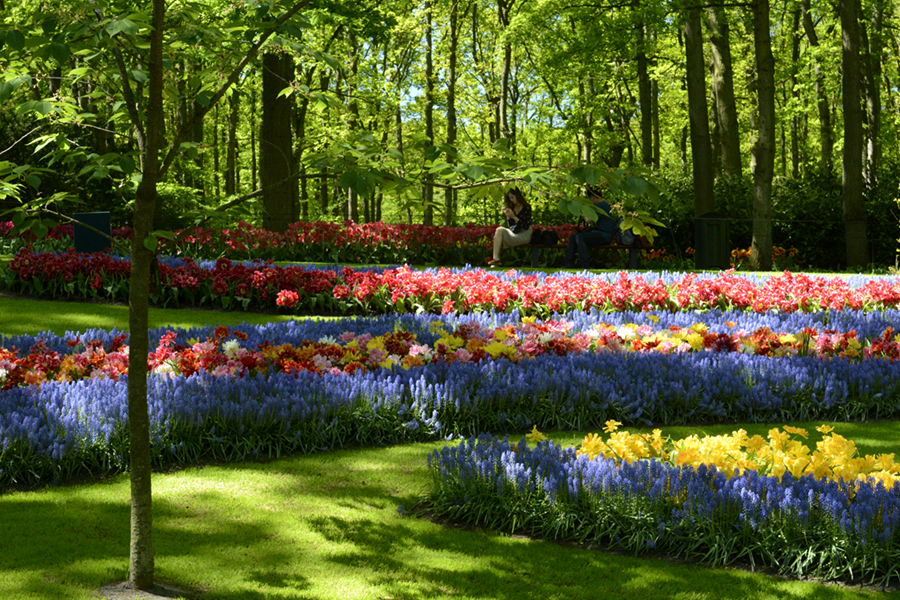 This almost looks cheesy but believe me the colours are real