Smurfs – the greatest hits……go on, I dare you!

Using the Dutch ‘Node Network’ of cycle paths we planned a route that would take us to Dalfsen and back, to see how far it was. There were a couple of windmills (Molen) on the map and as it was Nationale Molen Dag we thought we might join in and take a couple of photo’s to show how much an important part of the historical and working culture they are. Little did we know at the time that we would be treated to a wonderful tour of one by Jos, a local miller – but more of that later. Our route was as follows: 61 → 60 → 69 → 8 → 90 → 59 , at which point we arrive at Dalfsen. The numbers relate to the junctions where there is a possibility of direction change on your route – you simply write all these on a piece of paper taken from an online map:- click here.
Here you can plan your cycle routes – so easy. The UK could take a lesson from this, I know we have Sustrans but the infrastructure really doesn’t exist in the first place to help them do the same. All power to the cyclists, get the politicians to listen!

A wander around Dalfsen, a coffee and a visit to a couple of chocolate shops and we find ourselves beside a Molen – built in 1818. 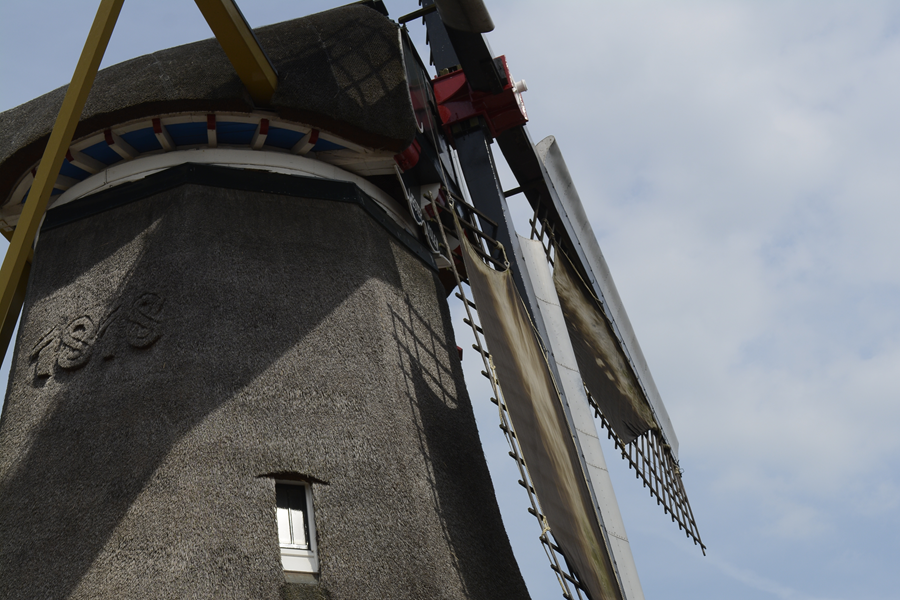 We weren’t sure if we could climb up the steps inside as there looked like lots of signs that said you couldn’t! Instead we smooched around the craft fair below it, tasting and ultimately buying some local cheeses to add to our picnic box. 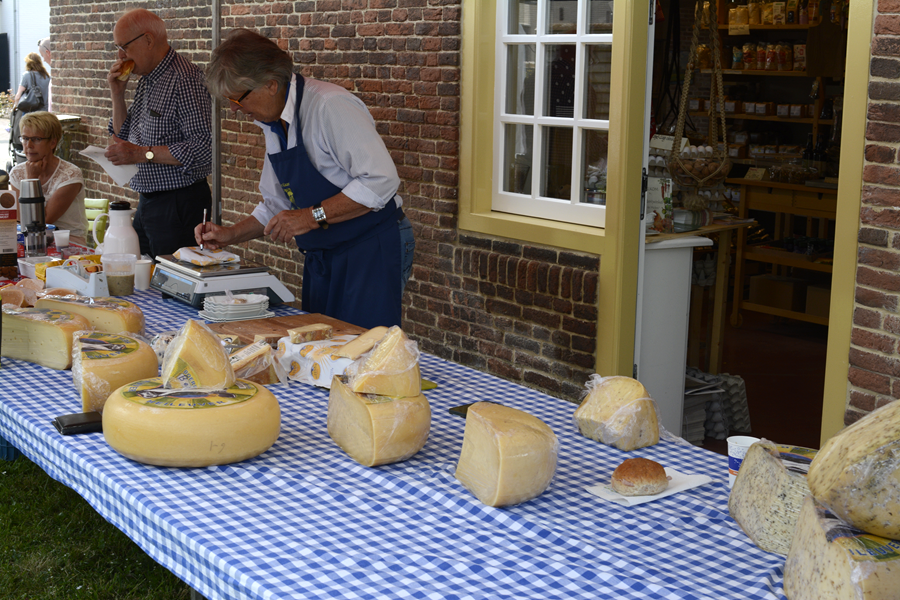 Then we noticed a load of trucks parked down a side street, all polished and shiny with numbers in their windscreens – a truck fest we thought? Asking some local girls we found out there were 81 trucks in all taking part, this was no competition though. The local truck owners all belong to a group who once a year take handicapped children and young adults on a trip around the town and surrounding countryside. We were touched. 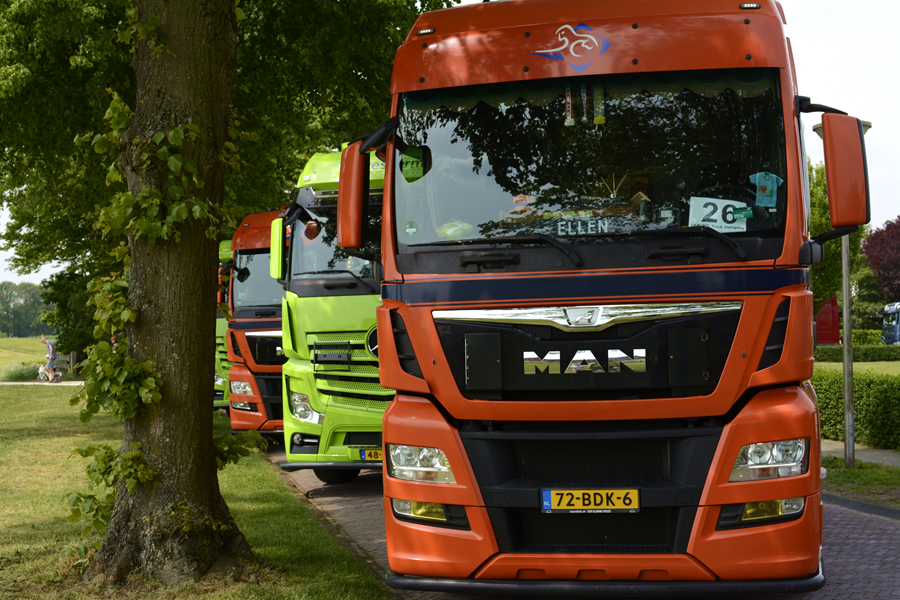 After a spot of lunch by a large water course off we popped on our node route again – different numbers, different view. This time we cam across a bike ferry across the Vecht, a bike ferry and FREE, the two things unheard of in our own country. Joy of joys, all automatic, no ferryman, just pop on with your bikes (10 max) and press the button to go, the ramp rises closing you in the open cage and when it reaches the other side it simply opens by itself – clever stuff. 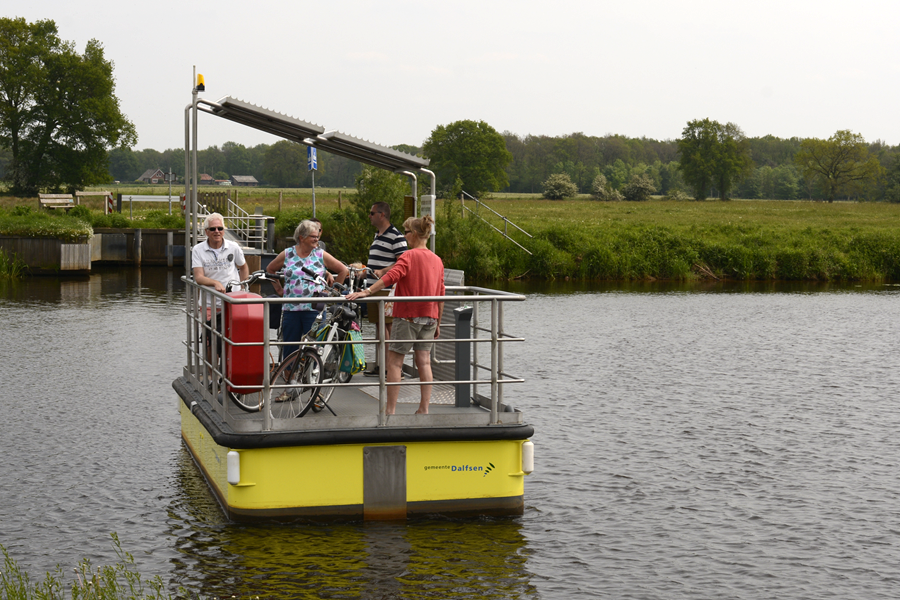 Bike ferry over the Vecht 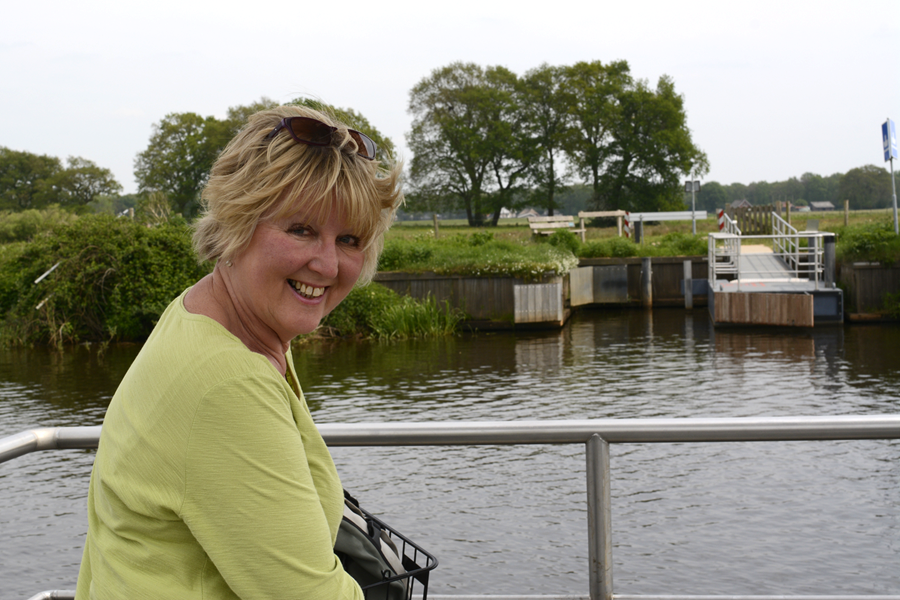 We then cycled (on concrete paths) through meadows full of cows, buttercups and green frogs trying to mate in the ditches (the frogs before you start!), an idyll route which we both felt was simply beautiful. The route home took us past another Molen – Vilsteren, this was open to the public but only had 2 sails on (this was due to the health & safety people insisting 2 were taken off as the bolts holding them were not up to standard) – the thought of a 2 ton piece of windmill falling off doesn’t bear thinking about. 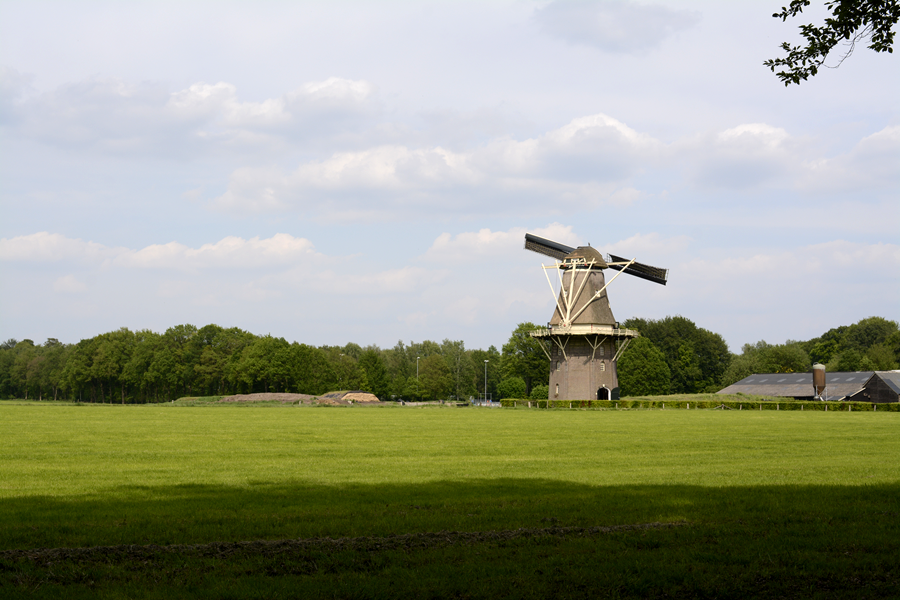 Once inside we were treated to a personal tour of the windmill by ‘Jos’ the local miller – we must have spent the best part of an hour with him. Amazing, despite the substantial pieces of inner workings Jos described it like it was a delicate machine and the slightest fault could upset the whole process. 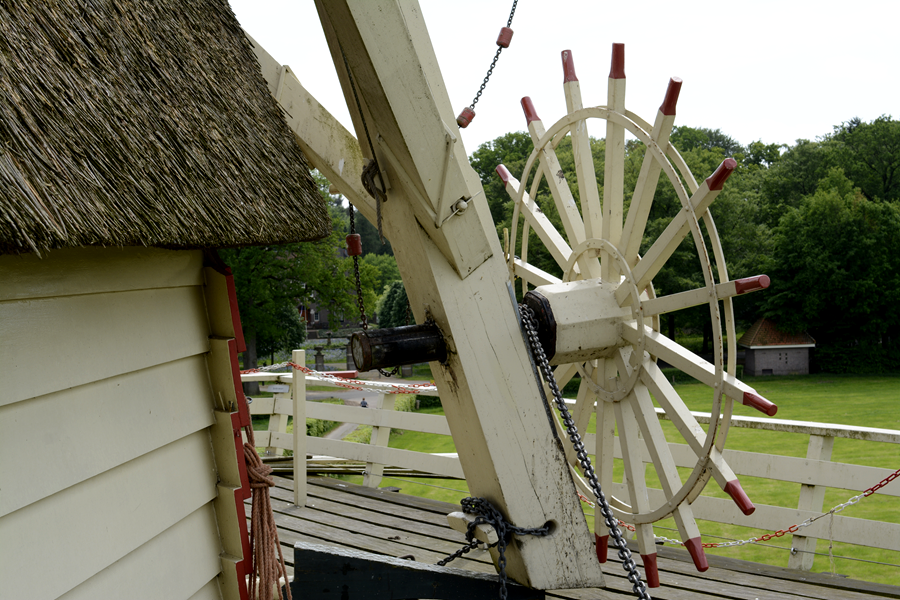 Visteren Mollen – outer wheel used for turning the top of the mill – apparently with the gearing, leverage and bearings a child could easily move it.

We were taken right to the top of the mill (the bit that turns around) – the large brake wheel which drives the whole system was made in 1766 and still going today! 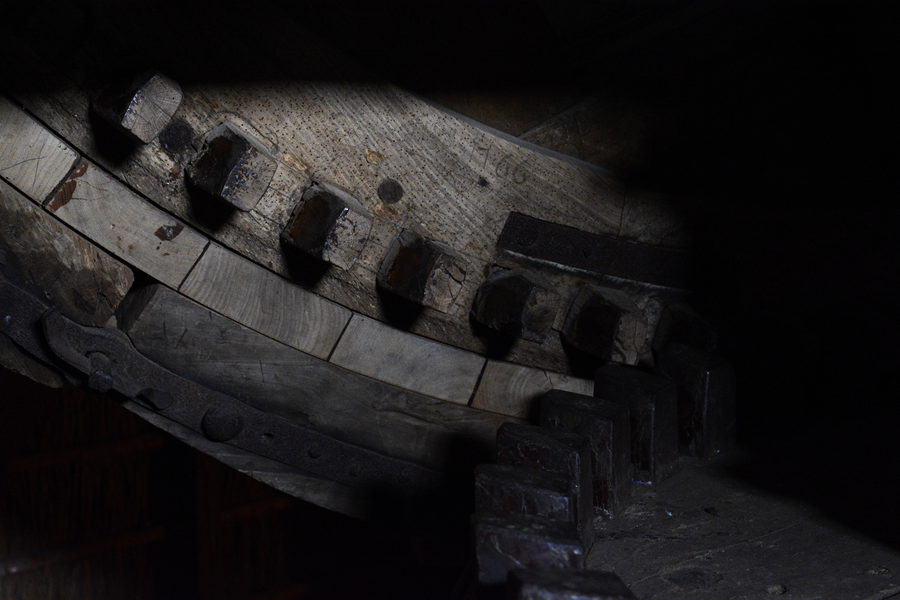 Vilsteren Mollen – huge brake wheel – made in 1766 (you can just make out the date carved into the wheel). 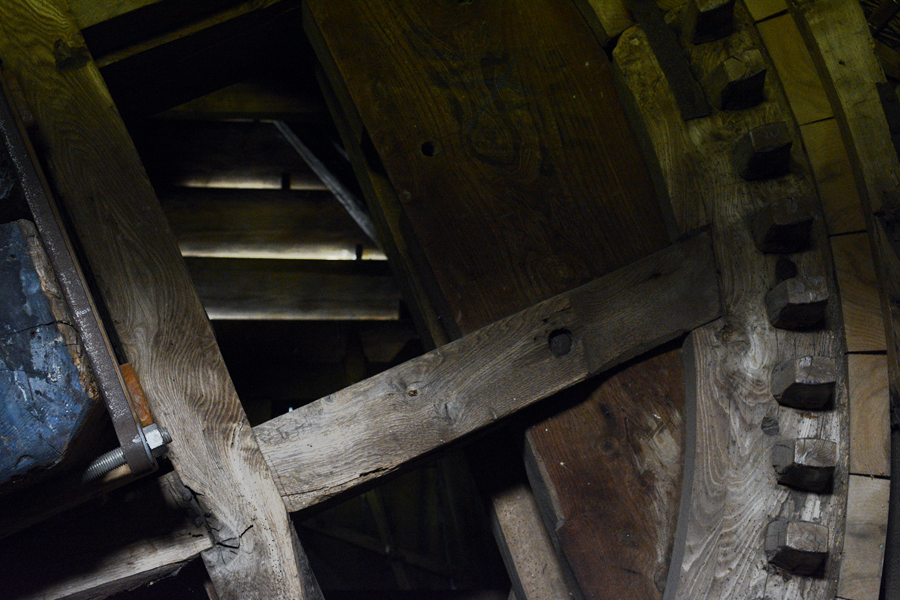 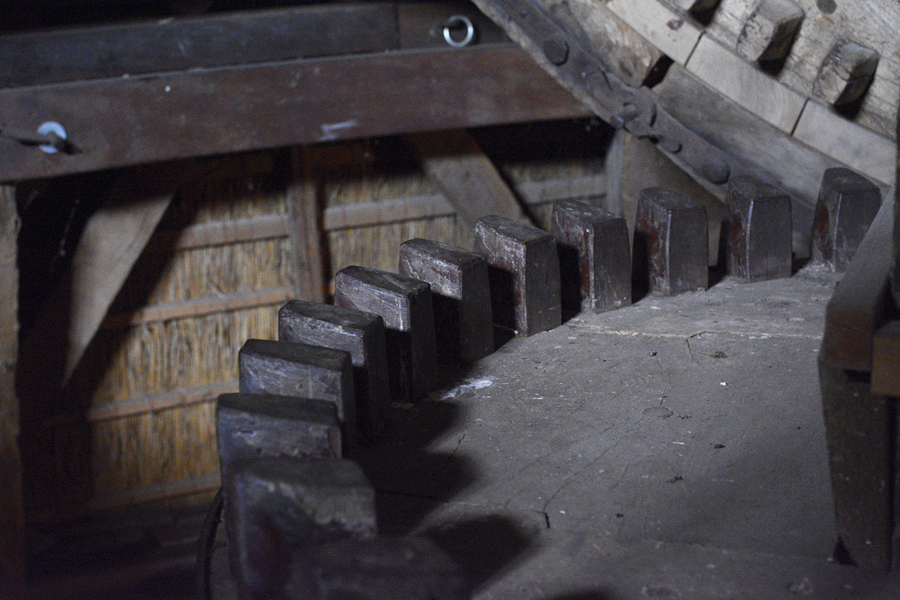 Vilsteren Molen – first transfer gear from the main brake wheel – ratio I believe is 2.8:1 – also number of teeth used on each wheel are prime numbers so they do not interlock at the same point on each revolution – clever clogs!

Who needs electricity – ahh, I do to put this blog up – doh! Anyway it was clear Jos was passionate and proud about his work and rightly so – to become a miller in Holland is a minimum of 2 years to qualify, more like 4 and you have to take a pre-test after so long to see if you can go on to take the big test! Goodness only knows what the big test is but Jos described as part of his job climbing out on the wooden sail slats to tie on the sails – no thanks!! Whilst we were on the outer deck the lorries we had seen previously drove by with the passengers sounding the horns all the way on their special tour.

All I can say is a wonderful day out seeing Holland at it’s best, lorry drivers helping to give something back to the community and ‘Jos the miller’ showing us some history, culture and passion for his work.