Monday 27th May
We left Altnaharra today looking forward to a wonderful drive to Helmsdale. The road follows the railway route we took from Helmsdale to Forsinard, we visited the RSPB reserve there in 2017 during our North Coast 500 trip. We were not disappointed despite the intermittent rain – to be honest intermittent rain was like being in the Carribean to us after having 36 hours rain non-stop – still, that’s what happens in the Highlands. Loch Naver, which is nearly 10km long and average 0.5km, rose about 200mm (8″ in old money) over that period, we were on a loch side pitch but the scuba gear was not required. Previous trips to Scotland had provided us with days of glorious weather, the spell was sure to break at some point. We are not complaining, my literary ineptitude cannot describe the beauty of this wonderful country, rain or shine the visual impact is stunning. 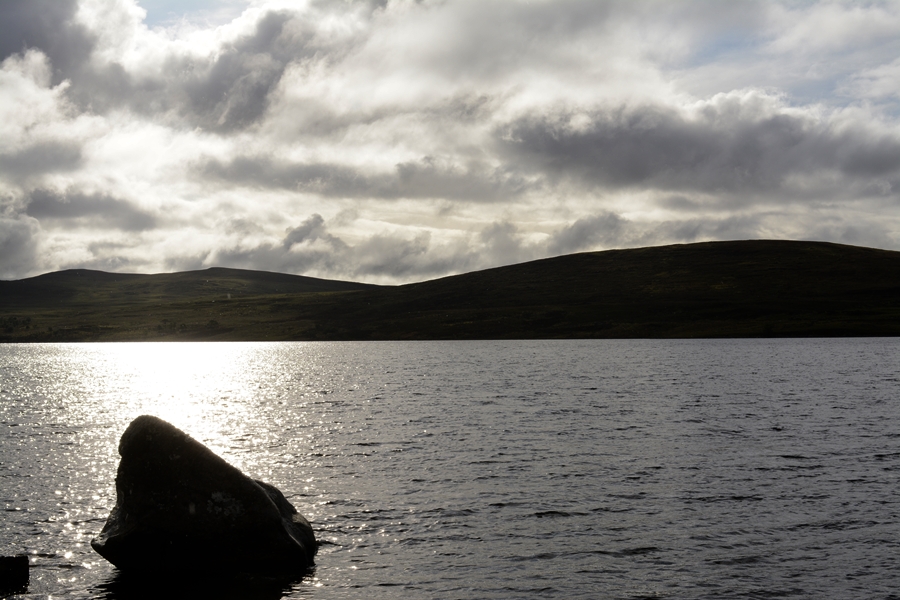 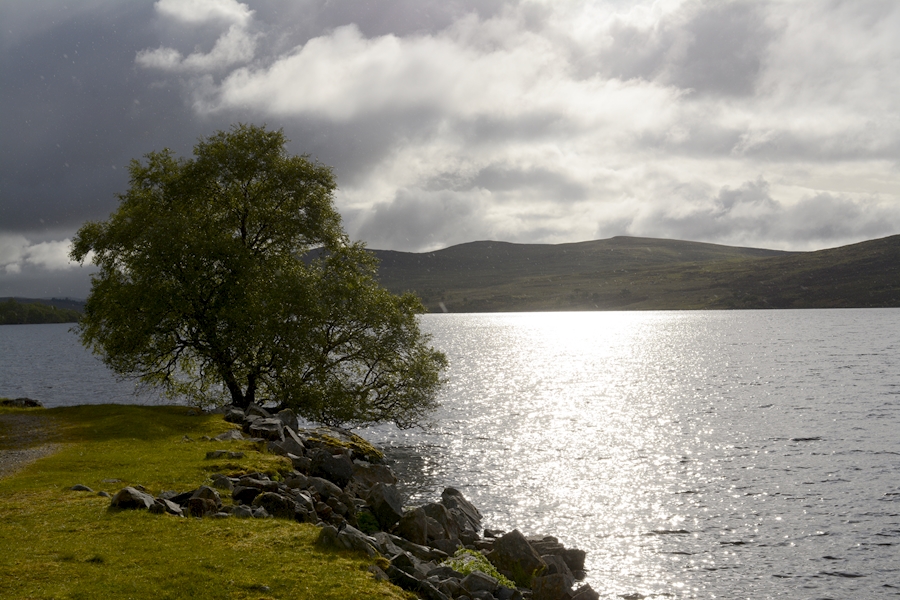 Loch Naver – the sight from Hilma

The drive from Altnaharra to Helmsdale is approximately 40 miles along single track roads with passing places which took us about 2hrs (and we only had a short coffee break in the middle). Serious concentration is required on these roads with our wheels being only about 12″ from either side of the road (and the sides are very soft and boggy!). 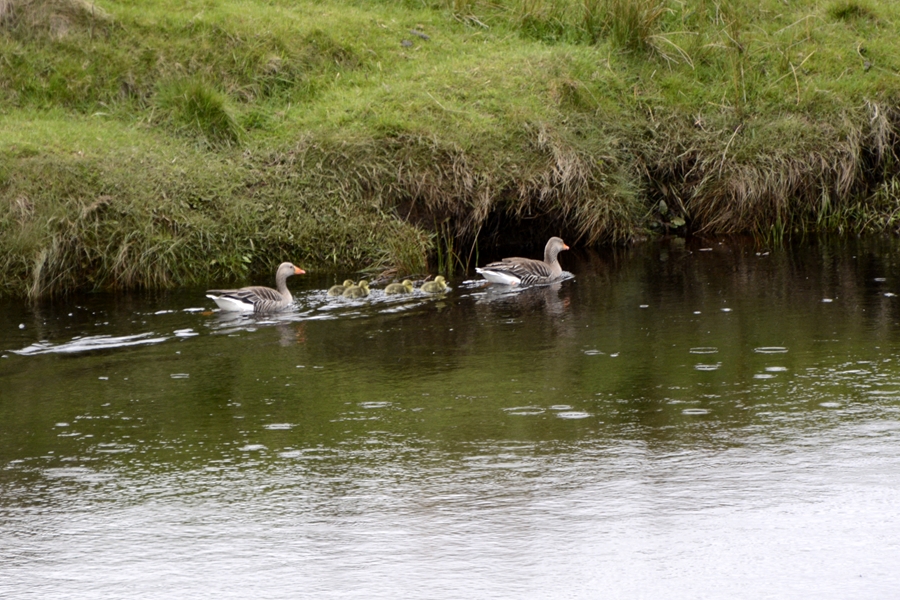 Dornoch was our lunch stop – our good friend Peter in the village at home had put a request in for a bottle of Glen Goyne highland whisky – we were advised the Old Courthouse was the place to go – sure enough they had enough whisky there to satisfy the taste any whisky buff. Ironically the link to our village did not stop there, we noticed some bottle bags that were supplied by our neighbour (they probably won’t order any more now they’ve seen the quality of the neighbourhood he comes from!).
Our target was to get to Loch Ruthven to try and see the elusive Slavonian Grebe. There are only around 20 pairs breeding in the UK and limited to an area around Loch Ness region. We arrived around 5:00pm and were not disappointed, a little bit of a wait but we managed to see 2 on separate parts of the Loch and eventually saw a pair trying out their Olympic synchronised diving skills. 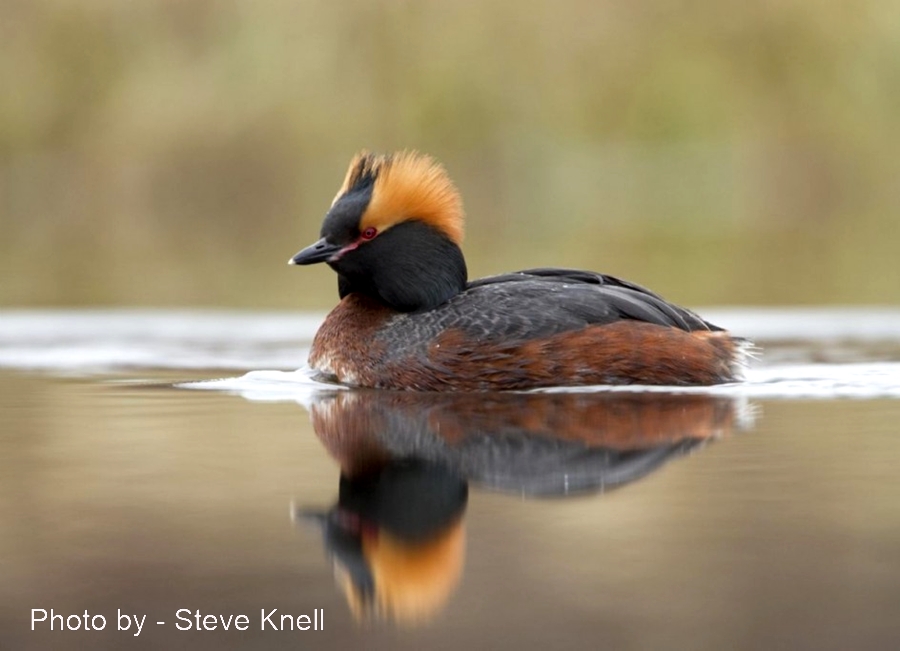 Slavonian Grebe – NOT MY PHOTO t courtesy of Steve Knell

Our overnight stay was a last minute booking as after a long drive I didn’t fancy spending another hour trying to find a wild camp spot so we opted to stay on a handy CL site about 1 mile down the road – The Trout & Grouse at The Steadings (a Johannsson hotel with 5 caravan / motorhome pitches – Luxury). A trip to the bar was in order after our supper and a most convivial chat with our hosts and a couple of Americans who thought Hilma was ‘cute’ when compared to their 28ft RV back home with pull out sides, automatic levellers and an on board ‘hoovering’ system! Close your ears Hilma, you are not getting one!

Sunday 26th May
Raining sheep and deer today. Imagine that.
Off out to lunch today as there seems to be a huge low (or two I suspect) hanging over Scotland and it is not moving away (I don’t really know as we have no way of finding out apart from the printed day’s weather on the warden’s door – no wi-fi, no radio, no phone data). I did buy a spare 4G data card but it was Three – maybe EE would have worked – I’ll never know unless I come back and try (not necessarily a valid excuse to come back here but we don’t need one, at some point we will be back to Scotland again).
Lunch today was at the Crask Inn – somewhere else in the middle of nowhere (look it up on t’internet and you’ll find out where). This inn doubles up as an Episcopal Church so I thought I would kneel and pray for some better weather but that would surely be seen as rude in the bar. A fire that is kept in all year around, a small dog to greet us, a great chat with the landlady about fishing, life in the highlands, the history of the inn (someone bought it as a hideaway a few years back but were unsuccessful) – although it is in the middle of nowhere it is the only inn on the road for goodness knows how many miles – not a good idea to try and hide when it’s on every road map. 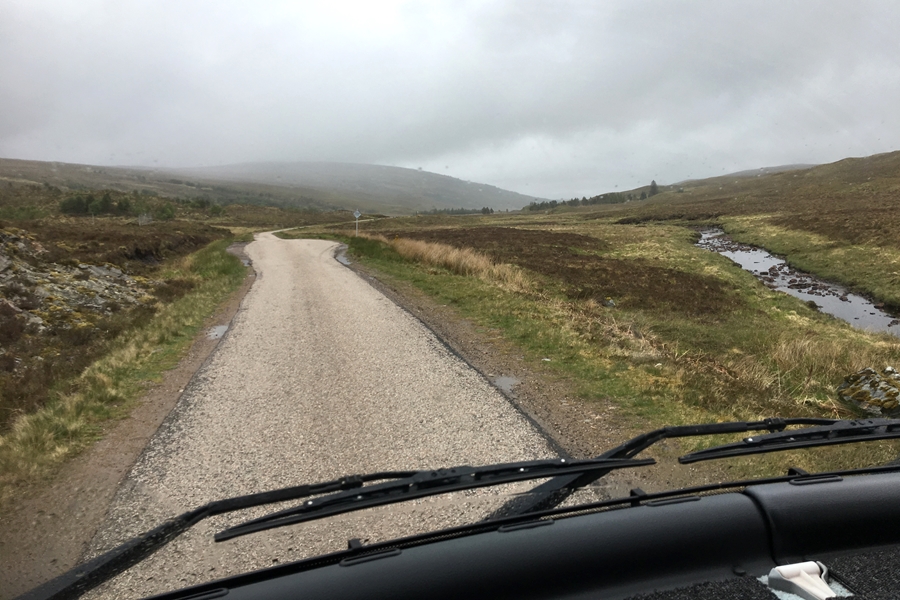 They are completely off-grid, we started chatting about the wind farm that is being put there (but not overlooked by anyone) the right or wrongs of clearing some of the forestry land and other environmental issues around the ‘flow country’ (see write up on Forsinard – North Coast 500 trip) which is where the inn is located. A great couple of hours talking to all and sundry that came in from all over the country, warm and toasty by the log burner I could have stayed a while longer. Considering it’s location, during those 2 hours we spent in the cosiness about 10 people came and ate, so whilst not jammed to the gunnels it is a welcome stop for many a traveller.

Saturday 25th May
Raining cats & dogs. Wouldn’t that be a thing – imagine walking down the street and a St.Bernard fell on your head! You might just come round after a few minutes then down comes a Persian Blue to whack you on the ear. You’d quickly take cover – which is precisely what we did today. Both of us hate being cooped up for too long and getting a little stir crazy we decided to up sticks and go for a drive to the North Coast. ‘Upping sticks’ – where does that come from? – must be a northern thing. Talk to a caravanner and they’ll swear that the flexibility of having a car overrides the ease of which to ‘u p sticks’ – talk to a motorhomer and they’ll swear how much easier it is to go from place to place without a lot of palaver. I digress (again) – I do have a habit of that when a thought pops into the head.
We decided to drive up to Skerray on a small promontory a few miles off the main North Coast 500 road.
Winding our way down the narrowest of lanes wasn’t too bad as the view was open and had plenty of time to move over for any oncoming traffic. Traffic what traffic? This road goes down to a small harbour, a post office and a telephone box – a few houses and not much else. 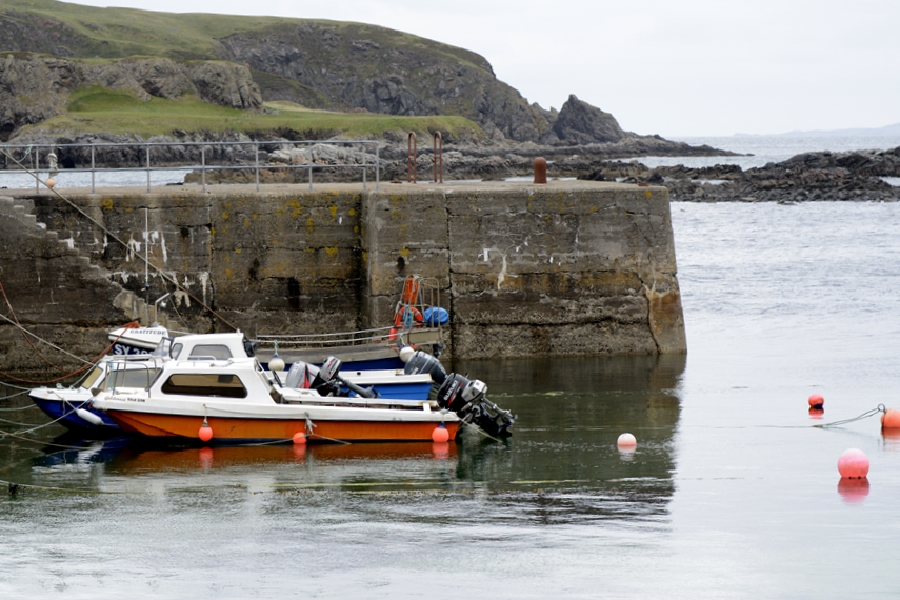 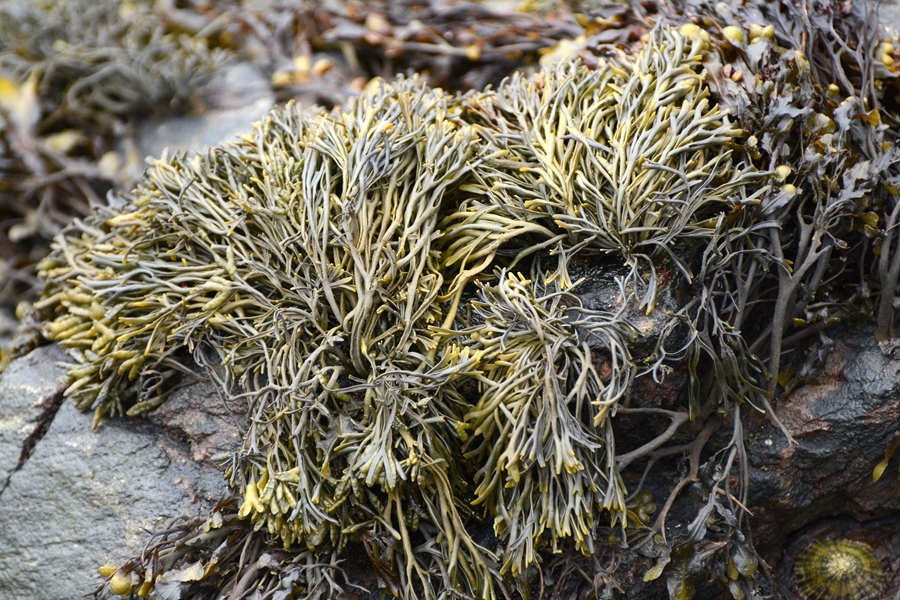 Skerray seaweed – me trying to be ‘arty’ with the camera 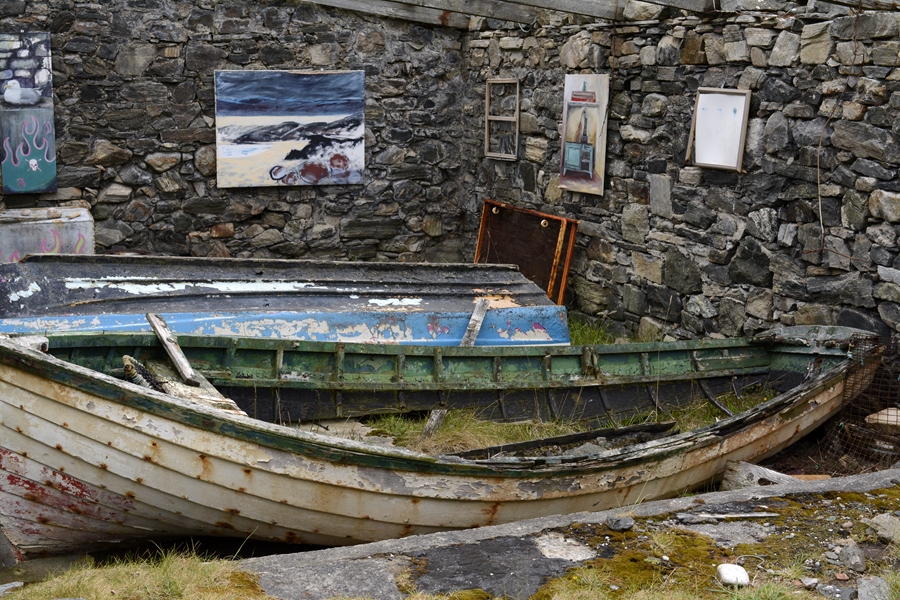 Ironically we found a CL (Certified Location 5 van site) overlooking the harbour with a single caravan on it. Maybe we’ll visit again and stay for a day or two. The next thing we had to do was find some fuel – we could easily make it back to Altnaharra but needed enough to get out of their (it is a long way from anywhere if your low on fuel).
Putting ‘fuel’ into the satnav it told us there was fuel at Bettyhill – about 8 miles away. Driving along the road we came to a beautiful estuary (Torrisdale Bay) – a little bit of sunshine so we stopped for lunch and were amazed to see about 50 Ringed Plovers and 20+ Golden Plovers (also having their lunch) – got the scope out to see them close up – Beautiful. 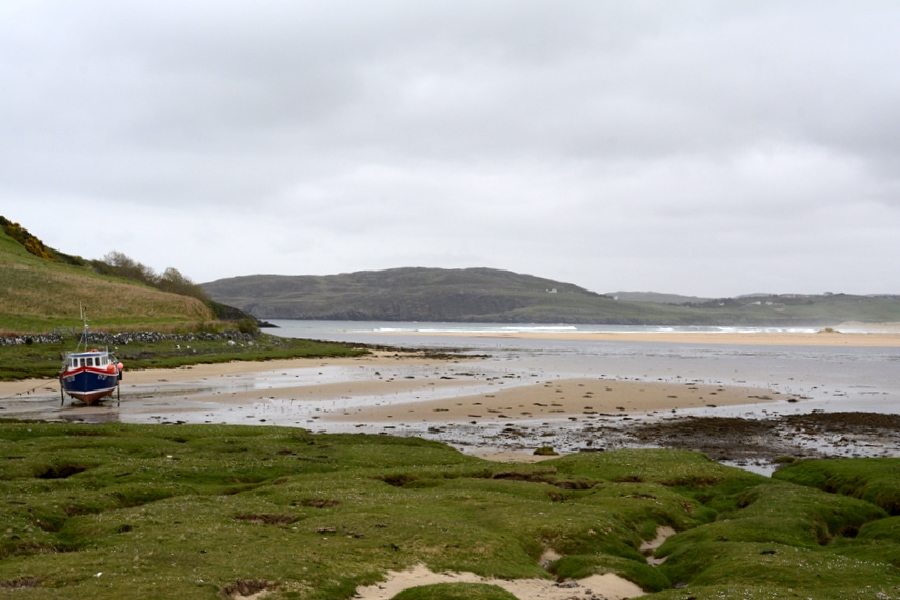 View across Torrisdale Bay – lunch with the Plovers

The fuel station at Bettyhill turned out to be 2 pumps outside the local shop – a queue of motorbikes and the postmen were in front of us waiting to be served. The lady serving was also serving in the shop so a little wait was in order – no worries we were not in any hurry. After filling up the fuel and a few groceries (ice cream & beer) we headed into the local car park to catch up with some 4G wi-fi to upload a few days of blogging that wasn’t blogged. That done we headed back to Altnaharra via a different route (I told you all roads lead to Altnaharra), our stir craziness cured for a day or two.