So, we are off to our Cornish neighbours – the Bretons. Now I’m no history teacher or aficionado but I recently read that Brittany did not really become part of France until 1532. Now I’m not about to delve into the history books and see if this is correct but at least it saved me having to go through another passport control to get into the place.
We sailed from Portsmouth to Cherbourg in a little over 3 hours – imagine if that could have been done in 1532 – where would we be today? Mars at the very least. I digress.
A pleasant crossing and this is our third trip to France in Hilma. We have done the Dover – Calais route twice and I swore never again, one is swayed by the cheapness of the ferries and the speed of getting across, but that drive around the M25 just seems to go on forever and I always feel like chewed cardboard afterwards. Non, non, et non, I have spent a little more and going via Portsmouth, a mere 3 hours drive away.
The night before we did a small Certified Location (CL) site opposite a pub – ha, well organised I thought. Also not too early a start as the Ferry was at 9:00 – they made me try Hilmas new reversing camera – so good it was that I was told to slow down getting on the ferry. Reversing on gave me hope we would be the first off- we very nearly were – 5th to be precise. Mrs. Garmin was fed with the necessary co-ordinates and she was very polite in instructing us.
We were aiming for one of two Aires – we would decide when we arrived which one to use. The first Aire we looked at (St. Pair sur Mer) was a barriered affair and looked uninviting so we moved on to St. Jean le Thomas – a lovely little site that had about 17 spaces (€8). The day was really hot so an evening walk along the beach afforded us fantastic views of Mont St. Michel which we intend to visit tomorrow. 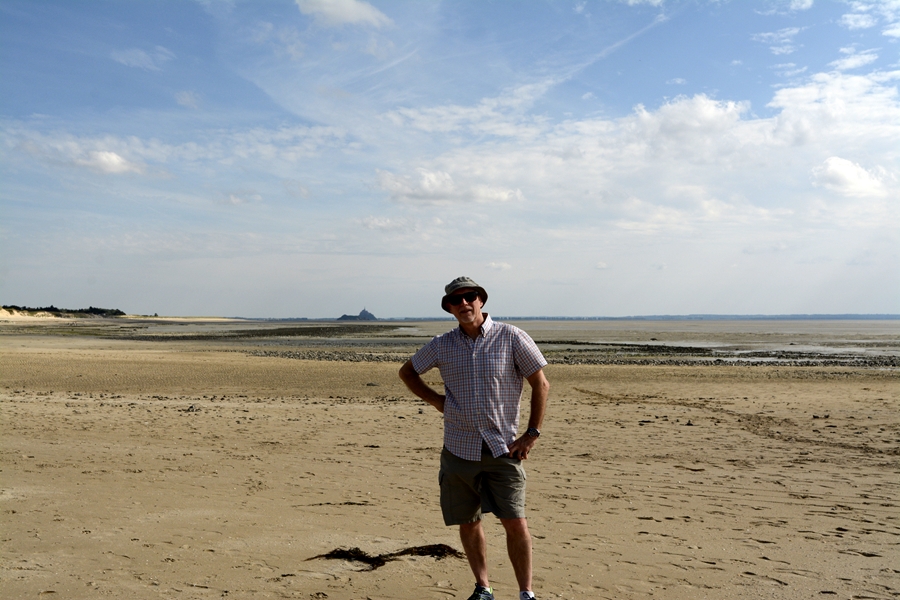 Game of Thrones star Ian F – with his own dragons shadow from high in the sky (oh and Mont St. Michel in the background – or is it Casterly Rock?)

So day 1 is over – no dramas, plenty of onions to look at in the fields but I await my first view of the Bretagne hooped shirt (not likely as we are still in Normandy!).