Dramatic coast, mist and a moustached bale.
Brittany in our grasp – 25th June 2019

Leaving Treguier was a little sad as it was such a lovely spot – we could easily have stayed another day or two and explored further, but we had an appointment to keep at Camping les Abers near Landeda. Once again, the coastline was dramatic and the views tremendous as we trundled (we can’t say ‘sped’ or ‘zoomed’ in Hilma because she just doesn’t do that) along the D786 stopping at St Michel en Greve, a huge bay, to watch some tractors and diggers performing what can only be described as mesmerising to-ing and fro-ing, scraping or digging up mud and depositing it further out in the sea by the low tide mark. It’s one of those moments where one has a little inkling of why something is happening but don’t really know the full picture – a bit like life really.
Moving on the weather was slowly improving and we stopped for mid-morning Kuoign Amman cakes – speciality of the region, meant to be the fattiest cakes in Europe – lovely. 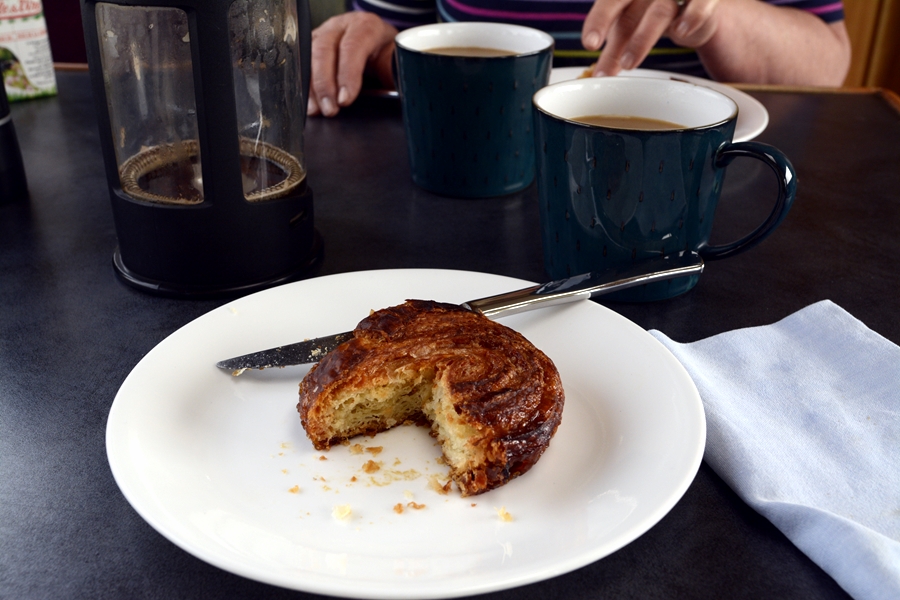 HANDS OFF – it’s mine. The wonderful Kouign Amman – burp!

The sea mist was rolling in on this beautiful bay (Baie de Kernic) creating a real ethereal view with white sand and turquoise water. 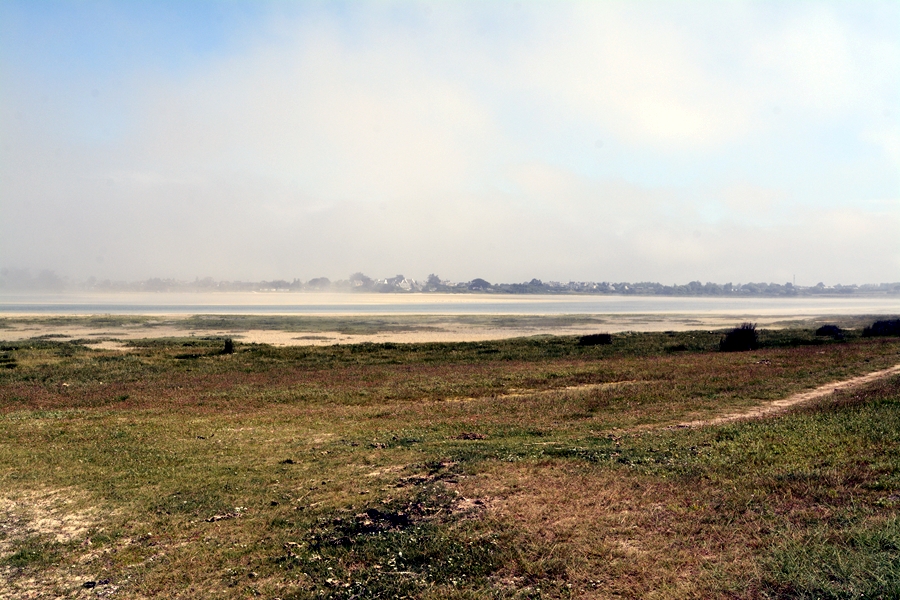 There was a strange ‘farmers’ type construction advertising goodness knows what which was quite amusing – not sure about the moustache – perhaps it was a local barber’s advert? Perhaps it was to ward off those holiday makers like us so we don’t spoil their landscape! Whatever it was for – it certainly made us laugh. 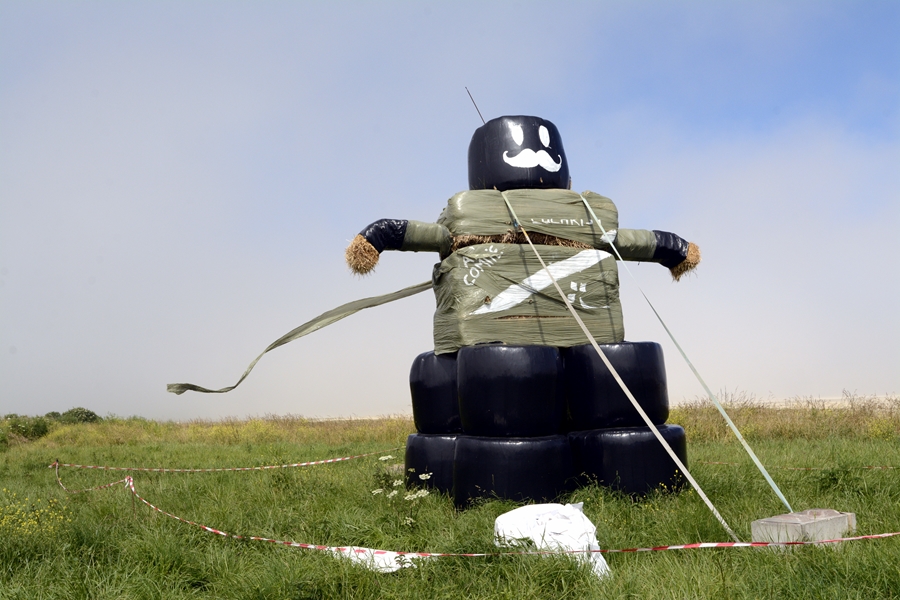 What the heck is all this about? Strange moustached bales warding off the incomers? A barber shop advert or the young farmers messing about?

The Kouign Amman (pronounced Queen Amman) was delicious and I think the calories will hang around for a few days. When fitness programs talk about burning calories off, well I reckon this one cake would need a firestorm before they were gone.
Camping de Abers is a wonderful site, small compact hedged off areas taking 3 to 4 caravans or motorhomes, gives each section an air of privacy. We have a fantastic view over looking the bay and Hilma is literally 50 yds from the beach – heaven.
The weather was warmer, the sun was shining, the wine had been cooled, life was good. 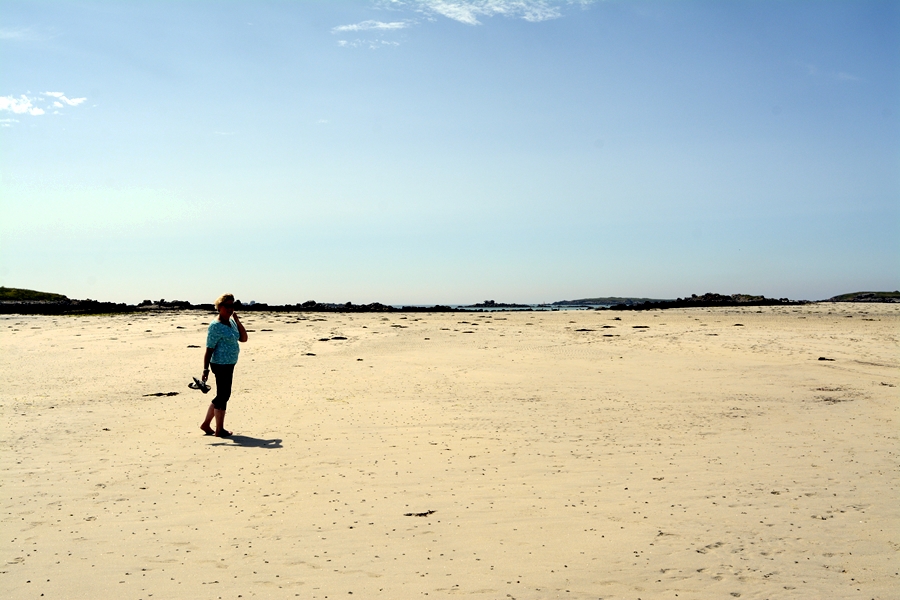 Shoes off and away we go – the beach goes for a long way when the tide is out. 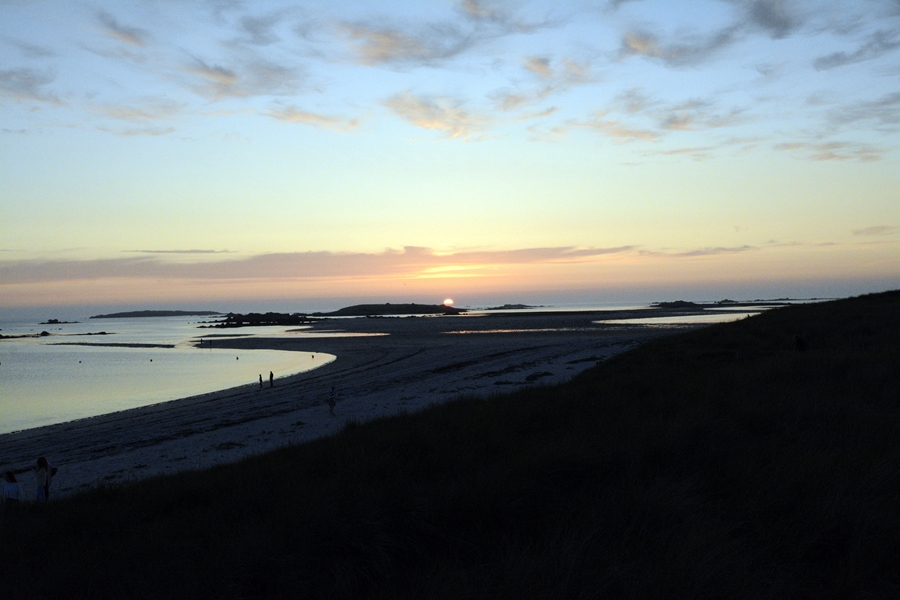 This was taken at about 22:30hrs – beautiful