Hah – just when you think you have this motorhoming malarkey cracked, the travel gods will poke you with a big stick. “Not so fast sonny boy, we’re just going to throw you a curved ball because you had such an easy time of it in Scotland”
We arrived back from our NC500 trip with barely a glitch whilst we were away, apart from a blown fuse which we managed to sort within a few minutes. Already we were talking about where to go next, a few weekends in the UK, some catching up with family and then off to France later in the year for our first foray abroad. Easy, peasy. We were literally on the last bit of cleaning and ‘plop’ (and a scream from Janette) one of the plug holes in the shower tray literally broke away all the way round. We were not happy bunnies, when things like this happen the brain goes numb and you wonder how the heck a) it can happen and b) how the heck are we going to get it fixed. 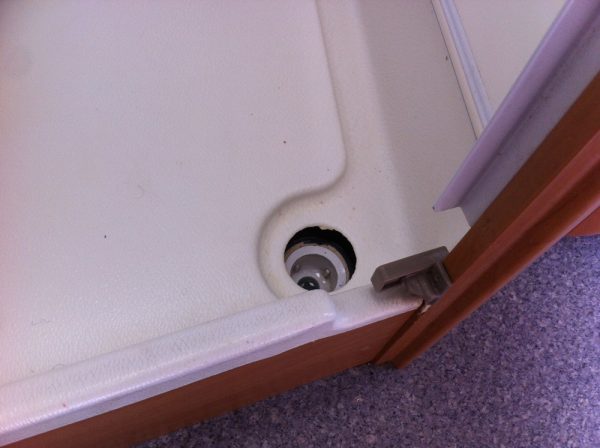 The break was all the way round and on closer inspection it seemed pretty clean, apart from one small jagged bit. Time to start fiddling around and see what’s what underneath. Easier said than done – a german built motorhome is a thing of beauty – it is also very well put together and a devil to take apart. I tried taking the front lower cover yet despite undoing the holding screws it seemed to be locked in place by the shower tray itself. It was then that the enormity of the possible task ahead of removing the whole shower tray was beginning to dawn on me.I managed to remove all the shelving in the cupboard next to the shower to see the pipe run and check there was no other leakage occurring, fortunately it was dry as far as I could see. The break point seemed very thin, perhaps about 1mm – the probable cause was just age (but don’t tell Hilma), uv deterioration and and perhaps many years of using bleach like substances for cleaning. 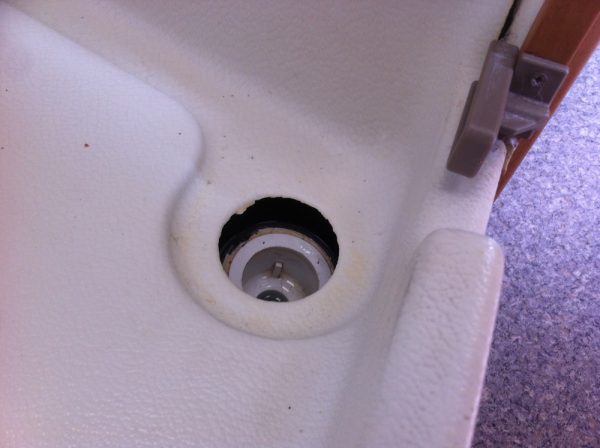 The break point was very thin

Daunted by the whole thing I decided it was time to accept fate and ring Brownhills of Nottingham to get a price for a new shower tray. Fortunately I was sitting down – £498 plus delivery and there were 7 in Germany and could be with us in 14 days. Now it wasn’t necessarily just the shower tray price that I was worried about, it was how much someone would charge to fit it if I failed miserably (which was quite a high probability). Quick calculation in my head was starting to get close to the £900 – £1,000 mark (ouch). Whilst talking to the nice man at Brownhills I found out that every Hymer has a unique ‘build code’ and once you have that trying to source parts is so much easier.I digress. Brownhills man (as opposed to Piltdown man) was very helpful and sympathetic, he mentioned a possible repair service but, didn’t know where they were based but remembered they were called ‘Speedcoat‘. Nothing to lose then, a quick search on Google revealed a company called Speedcoateuro, logging on to their site they were easily within driving distance so I gave them a quick call, sounded positive , said they could probably fix it but if I could e-mail some photo’s that would help. The reply back was in the positive, I asked for a quote (holding my breath) – £360. I must admit at that point I wanted to get Hilma over there straight away but we had to wait a few days. I was still wondering if this could be done or not. Anyway off I popped with Hilma the following week, turned up, Dave had a quick look and said “Yep, no problem – should be done today, but just in case allow for an extra day”.Dave talked me through what they were going to do – ‘hot stitch’ the 2 pieces together and then spray a flexible 2mm coating all over the tray base. Nothing would need to be removed, they would ‘build’ a plastic tunnel sealing the rest of the shower and extending out to the door which conveniently was opposite the shower which would then seal off the rest of Hilma. All sounded good, proof of the pudding would be on collection.I rang later that day and was informed it was ready for collection at 5:00pm (sigh of relief). Fantastic job – looks the business – all we needed to do was wait 24hrs before trying out the shower. It came with a lifetime guarantee (lots of clauses obviously) but I was happy to see the tray all back together in one piece without having to attempt a complete re-fit of a new one.In my eyes these guys saved me a whole heap of trouble and money. 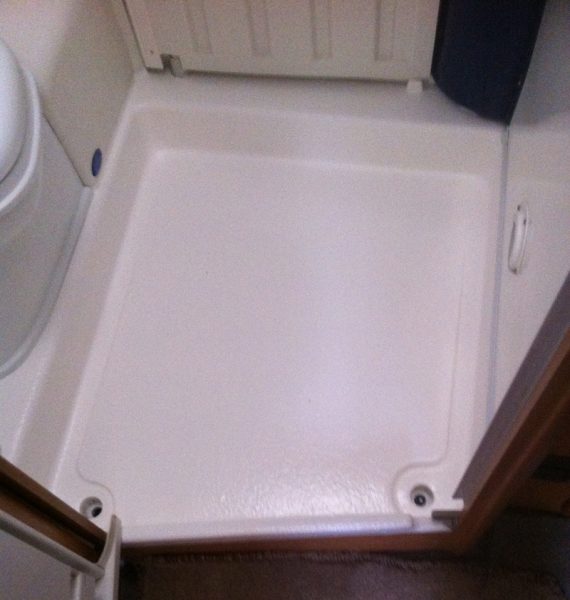 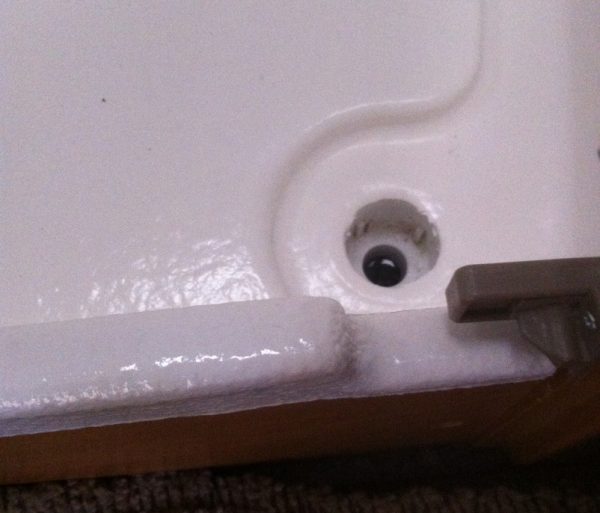 A close-up view of the fixed plug hole